How Traditional TV Is Reinventing Itself: 3 Trends to Watch

We are in the middle of streaming wars.

It’s predicted that in five years’ time traditional TV will surrender to Netflix and Amazon, the new media superpowers.

The battle over video streaming may be in full swing, but the accounts of traditional TV’s demise look a bit premature. It’s true that cable viewership has fallen drastically and lost 44% of the 18-24 year old demographic over the past five years. But this negative trend is only making broadcasters revisit their strategies. TV is not dying out but rather evolving, incorporating new technologies that weren’t previously associated with linear TV broadcasters.

The future of TV is digital, or rather, digitized. Fueled by the pressing competition from digital video platforms, this transformation touches every cornerstone of the TV business, from content production and delivery to relationships with advertisers. Here are three major pan-industrial trends that are set to reinvent traditional TV and fortify its competitiveness against OTT incumbents.

Back in 2015, Disney/ABC Television made a stir in the news by moving their master control room and playout to the cloud. And, slowly but surely, this transformative approach is winning over broadcasters and TV operators who need to respond to OTT competition. According to Research and Markets, the cloud TV space is estimated to grow at an impressive CAGR of 8.80% during 2017-2023.

Compared to hardware-intensive infrastructures, virtualization lowers expenditures on physical equipment required for each new channel launch. Instead, the entire process can be moved to virtual machines, which speeds up time-to-market and allows tweaking content on the fly to tailor it to the consumers’ shifting preferences. This is how the TV providers’ operational efficiency can match up to that of major OTT rivals.

From the viewers’ perspective, cloud TV means a more flexible access to premium content in Full HD and 4K UHD, available across connected devices. Virtualization is critical when it comes to the ability to deliver to multiple platforms, from smart TVs to mobile handsets.

Last but not least, cloud TV transformation goes hand in hand with the ability to collect and analyze astonishing volumes of viewership data that is almost impossible to measure precisely in the traditional TV setting. Such advanced analytics could offer more visibility into viewing habits to strengthen and personalize broadcasters’ relationships with audience. Analytics can also help to level up inventory sales through insights into ad performance.

In 2017, the worldwide digital ad spend beat TV advertising by 6%, or $31 billion, and this gap will only keep widening. By 2021, the TV ad market share will drop by almost 5% more, and the moderate 2-2.5% growth of TV ad spend won’t be able to make up for this decline. It surely is a wake-up call for broadcasters and service providers to find new ways of delivering value to advertisers. And this call seems to have been heard.

TV market players are looking to automate the ad buying process and make it more data-driven to be able to segment and target audiences like in digital advertising. This would allow advertisers to reach the right high-value viewers with relevant, dynamic video ads of outstanding quality based on those viewers’ interests and previously watched programs.

While TV ad targeting is still far from reaching digital advertising capabilities, there has been some headway on addressable TV and personalization.

It’s no accident that some of these experiments are taking place on connected TVs, as streaming TV viewers are reported to complete 98% of all video ads. Multiple research sources also agree that connected TV is home to premium long-form content viewership.

Almost a year ago, advanced ad personalization for connected TV viewers was pioneered by Channel 4 on its AVOD platform All4. The broadcaster rolled out an original option for advertisers to address their target consumers by names, using Channel 4’s first-hand data on its 15-million subscriber base. The option was immediately picked up by such brands as 20th Century Fox and Ronseal.

Other experiments with ad targeting are tapping into the potential of addressable TV through cable, satellite, IPTV, and set-top box delivery. Addressable TV allows advertisers to show different ads to different households based on advanced audience segmentation techniques, beyond simple demographic breakdowns like age and gender. This has to do with programmatic buying of linear TV inventory, which results in serving highly targeted ads that are more relevant and engaging to viewers.

Addressable is gradually entering marketers’ media plans, but at the moment it’s seen as complementary rather than substitutional. Yet, with up to 85 million addressable households in the US, ad buyers can considerably expand their reach while informing their decisions with data. At the moment, addressable TV advertisers can track ad exposures, optimize their display frequency, and even implement negative targeting to exclude irrelevant viewers.

Partnerships with vMVPDs and Skinny Bundling

Contrary to the common opinion that TV networks have to adopt a streaming solution to survive, some broadcasters prefer to be careful about moving into digital streaming. They are driven to diversify their monetization streams — yet without investing into their own full-blown OTT platforms. Luckily, for such tentative adopters there are virtual multichannel video-programming distributors (vMVPDs) who offer safe testing of the digital streaming waters.

Sling, DirectTV Now, PlayStation Vue, YouTube TV, and Hulu Live are all examples of vMVPDs. They aggregate content, including that from traditional TV providers, and distribute it via internet-connected devices like smart TVs and gaming consoles. It’s been just a few years since vMVPDs entered the media market, but they seem to be developing fast. In 2017, vMVPDs collectively powered 20% of the US subscriber market, which represents approximately 1.4 million households.

For pay TV providers, partnering with vMVPDs is important because it means raising TV viewership rates by reaching cord-cutters and cord-nevers. So instead of losing viewers, especially millennials, to these emerging video services, broadcasters choose to provide their content as part of the vMVPD package.

The live TV networks that already joined in include ABC, CBS, Fox, NBC, ESPN, Cartoon Network, and NBCU, among others. In most cases, their channels are available on vMVPDs through so-called skinny bundles. This term is closely associated with the key value proposition of vMVPDs: to make viewers pay less for the essential bundle of preferred channels instead of subscribing for the entire cable TV package or to individual OTT providers.

Skinny bundling reflects a shift in viewing habits. The research shows that out of 81 TV network and SVOD options, people only picked 17.5 brands on average. There’s the growing importance for viewers to control their TV experience. Buying a skinny bundle, they can access both traditional pay TV channels and VOD content through a single subscription billed by the same provider, and this just adds extra points to the service convenience. It’s not surprising skinny bundles accounted for over 54% of OTT viewing time back in April 2017. 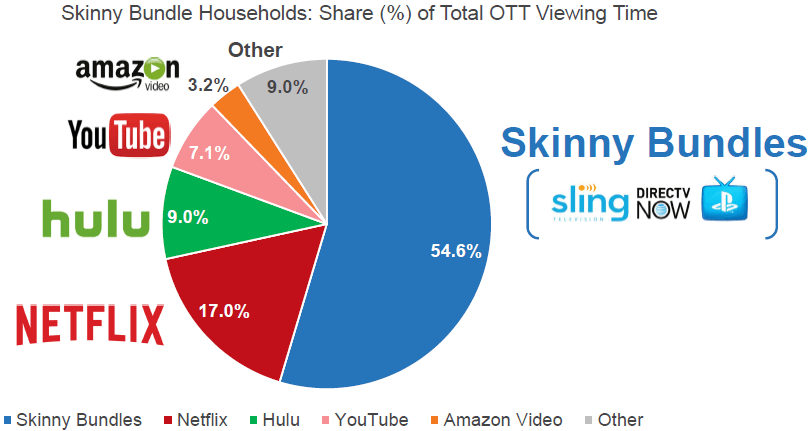 All in all, vMVPD distribution can be a sound strategic move for pay TV networks. This approach can help traditional broadcasters save the effort of building their own OTT platforms while still opening up their content library to streaming TV audiences across multiple connected devices.

A Balancing Act Between Linear and Digital

To counteract the fierce competition from OTT, traditional pay TV broadcasters are looking to reinvent their production, distribution, and advertising models.

Technology is at the core of this major reinvention. Cloud-based virtualization of operational processes, audience segmentation for programmatic TV ad buyers, and vMVPD content distribution all prove that broadcasters are thinking digital to keep their audiences and advertising revenues.

Over time, such convergence of linear and digital will only be strengthening. While it’s still too early to measure any tangible impact, it’s likely this approach will be setting up positive dynamics in the operational efficiency, advertising reach, and viewer acquisition of traditional TV market players.