Today’s audiences are increasingly seeking better options for more immersive entertainment experiences. By providing this kind of viewer involvement, VR and AR are quickly becoming one of the hottest technologies of the decade, with the projected revenues expected to reach as much as $150B by 2020.

Oxagile’s R&D team has been engaged in VR and AR software development for some time now. While working with these technologies, we mostly use Unity, a popular multiplatform game engine.

With the expertise we have in the video domain, we thought it would be a good idea to build something to empower Unity app developers. Why not a reusable Unity plugin that would provide easy video streaming for iOS- and Android-based devices right from the Unity camera? Think broadcasting exciting VR/AR experiences, panoramic 360° experiences, and more.

For video delivery, we use a variety of streaming platforms, such as Wowza Streaming Engine. We’ve had good experiences with Wowza’s products before when implementing video streaming for a range of endpoints, including VR and AR headsets.

Some time ago, Wowza introduced its GoCoder SDK — a great way to build powerful media streaming capabilities into iOS and Android apps, which made it a good fit for our purposes.

So the idea was to build a plugin that would provide a quick and easy way of integrating the GoCoder SDK with Unity-based mobile apps. Architecturally, the Oxagile Unity Plugin would work as illustrated on the diagram below: 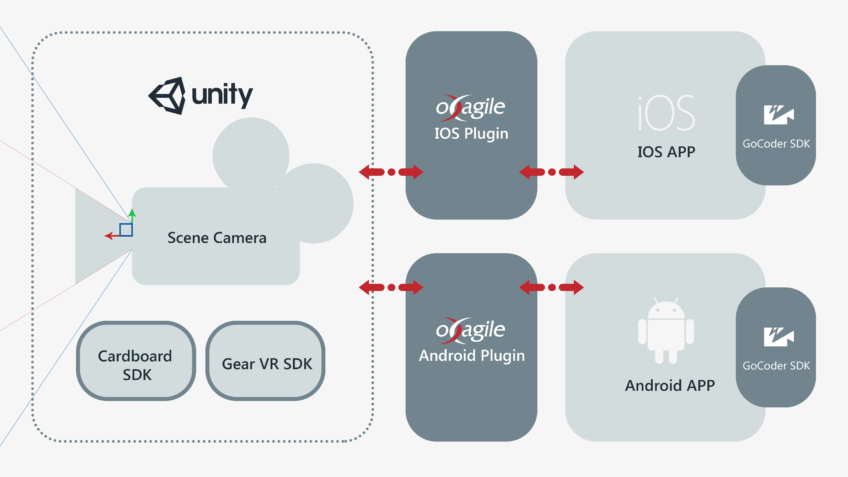 The beta version of the Oxagile Unity plugin works smoothly with both iOS and Android while successfully marrying Unity apps with the GoCoder SDK for Wowza-based video streaming. By relying on the plugin, developers can use Unity engine’s first-person view camera to stream videos from any Unity-based app.

To test the plugin, we built a demo head tracking-enabled iOS app. The app is designed to play a 360° tour of our development center, which could be viewed with e. g. Google Cardboard. The app streams an FPV video to a Wowza Streaming Engine server located on our premises.

We believe that streaming VR/AR experiences from an internal Unity camera has a lot of applications and potential, in addition to conventional streaming of the real world via a mobile device’s camera.

What do you think about streaming virtual reality experiences from Unity apps? Tell us in comments!