Native Video: The Next Survival Strategy for Digital Publishers?

What a hectic year 2017 has been for digital media publishers. Layoffs, stock fluctuations, failed revenue expectations and whatnot have created a rather bleak picture. More than ever, traditional text-first media companies showed their vulnerability in the evolving digital world, where, according to Vox Media’s CMO Lindsay Nelson, there might be no clearly articulated business model for them to follow.

In the mid-2000s, we placed bets on whether print media companies would survive the Internet onslaught. Now that the majority of them did, either through clever online subscription models or strategic alliances, we wonder if they could pull off the notorious ‘pivot to video’, which has been the hottest topic of the year in the digital media industry.

By the end of 2017, many felt disillusioned with the promises of pivoting to video in the light of major writing staff layoffs announced by Mic, Vice and BuzzFeed, who opted for building up video production units. Some predicted digital video’s decline, encouraging advertisers to abandon video ads in favor of other formats with more stable returns. Digiday added fuel to the fire with alarming stats on video-pivoting publishers’ plummeting traffic. 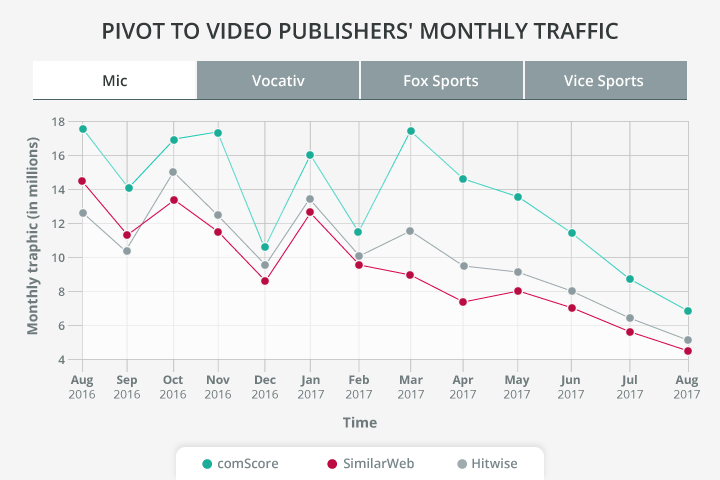 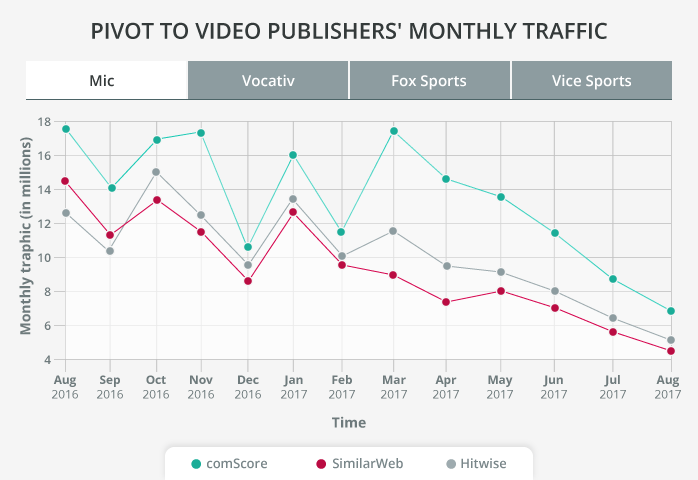 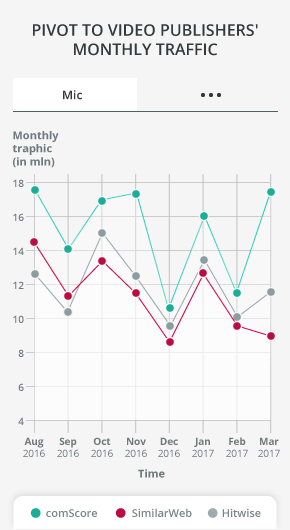 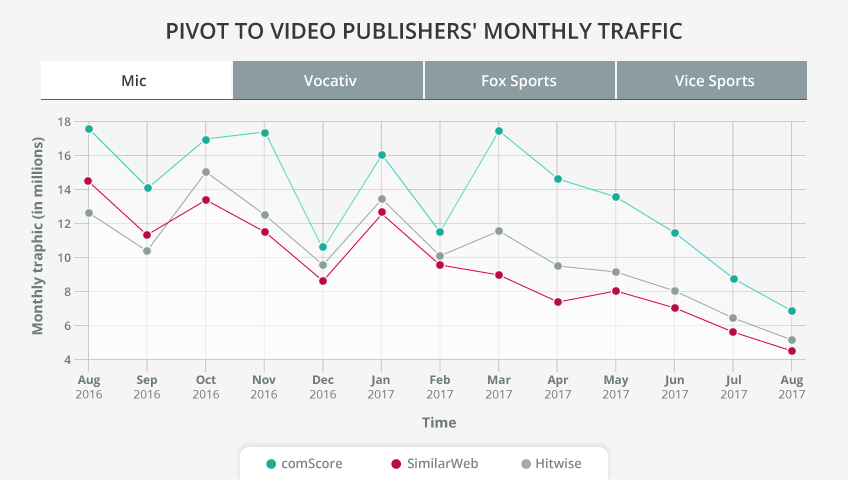 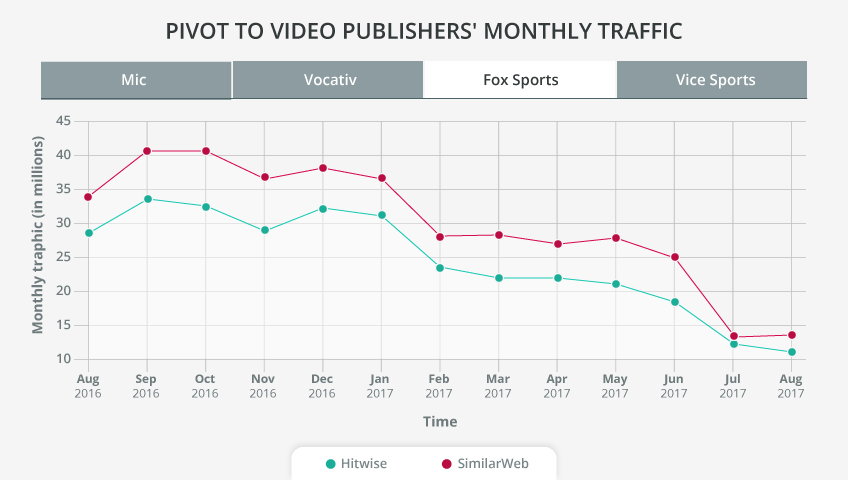 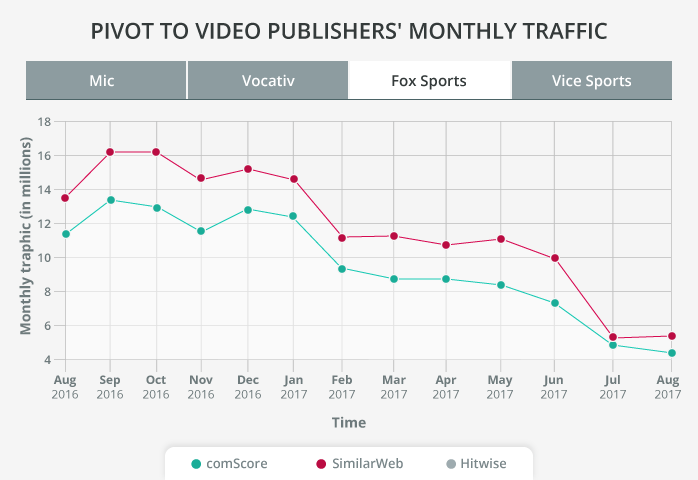 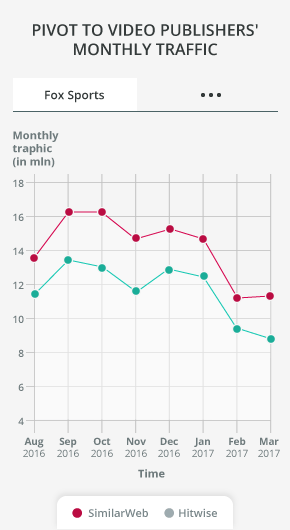 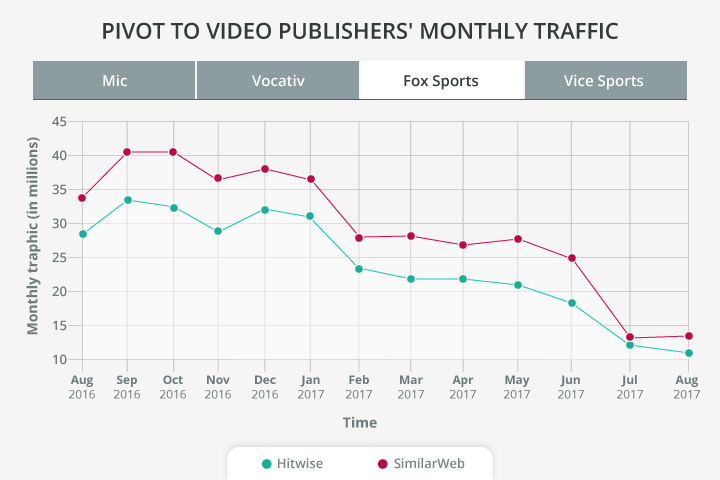 It’s true that the road to successful video adoption and monetization has been bumpy so far. The market is overcrowded. Too many publishers compete for a limited supply of advertising, while Facebook and Google eat up ad revenues generated from videos posted on their platforms.

But don’t rush to write off online video just yet. The problem seems to be not with the video format itself but with the channels publishers choose for distributing it. Turning away from third-party platforms (read: social networks) as primary video distribution channels and focusing on native audiences instead might become a healthy survival strategy for publishers this year.

Why Platform Dependence Should Go

Innovations such as smartphones and faster broadband paved the way for new content consumption habits that greatly favor online video over everything else (Cisco predicts 82% of all consumer Internet traffic will be video by 2021).

But it’s social media platforms — think the big three of YouTube, Facebook, and Instagram — that gave rise to a whole new breed of video-conscious content consumers. Since Facebook introduced video to the news feed in 2007, and further enabled live video streaming, the format’s popularity skyrocketed to over 100 million hours of video viewed on this platform daily.

This explains why video-pivoting publishers could think of no better place to reach and engage their audiences with original content. The problem is, they end up having very limited control over the way their content is shown and monetized, and the recent news exposed the ambiguous side of such alliances even more.

Facebook has been subsidizing top-level publishers such as The New York Times and CNN to produce original live videos since 2016, yet now it’s pulling back with no intention to renew the contracts. The start of 2018 also sees publishers facing more changes to Facebook’s news feed algorithms, which will now favor user content to weed out clickbait brand material.

To make it worse, Facebook has its own plans for original programming — its Facebook Watch now bids to become the go-to destination for short and mid-form content that the company has been paying others to create. At the same time, Chrome, Safari, and Microsoft Edge are implementing changes to stop auto-playing videos, which can also affect publishers’ impressions and engagement rates.

All these updates may undermine publishers’ existing strategies of video distribution on social media, but they also signify the move away from enforced, ‘push’ videos to high-quality, engaging ‘pull’ content that users go to on purpose. Does it mean that today’s viewership craves more meaningful videos to engage with directly?

If so, publishers might want to look elsewhere, like streaming their original video content directly on their own websites. The payoffs? More controllable video inventory sales with 100% ad revenues retained. Plus, the opportunity to generate native, loyal, and more deeply engaged viewership versus brand-agnostic feed scrollers. However, this approach leaves publishers no choice but to set up their own video management and distribution facilities. Though rewarding, this strategy comes with some challenges.

What Makes the Alternative a Hard Nut to Crack

Managing video production over distributed teams and streaming video can be tricky. Video management platforms are never easy to adopt, mostly because off-the-shelf products often fail to respond to each publisher’s precise requirements of scale, functionality and integration into their existing tech ecosystem. Custom-made video management solutions come at a price, but this strategic investment is precisely what can bring publishers a step closer to autonomy from unpredictable third-party platforms.

More challenges come from monetizing videos on-site through in-stream video advertising. The major concern here is brand safety for advertisers who look for a perfect match between inventory, audience, and message.

Relying on algorithms — and almost half of video ads were bought programmatically in 2017 — takes away ad buyers’ control over ad contexts and audience fit. In extreme cases like the one earlier this year, when brands suspended their YouTube ads running alongside violent and hateful content, this can even affect ad revenues. While agencies and adtech companies are working to fix it with premium inventory and programmatic direct models, publishers can focus on manual sales of their inventory directly to advertisers in proven brand-safe environments made up of their original content.

Last but not least, quality standards place more burdens on video-pivoting publishers. Video storytelling has been hailed as an evolution of journalism, and publishers now just have to keep the quality bar high enough to entice their audiences. This comes with strategic choices about budgeting and talent acquisition. As Susan Binikarim of NiemanLab brilliantly sums up, “Make very good things that people actually want to read and watch. That’s it. That’s all. That’s everything.”

If half-baked video strategies don’t seem to work, this doesn’t necessarily discredit online video, rather the digital publishers’ ways of distributing it.

So far, building up native audiences is seen as a way to avoid many pitfalls related to publishers’ dependency on social media platforms. Yet, breaking these toxic relationships with platforms is only possible when publishers are well-equipped technologically to handle original video content production, distribution and monetization.

The technology is already there, but are publishers ready to go native?

Oxagile has accumulated considerable expertise in online video and adtech. We provide a full range of services, from consulting to custom software development to software customization. Whatever your needs are, drop us a line and let’s see how we can help your business.