The Fan Challenge: How Sports Are Embracing Digital to Engage Audiences Worldwide 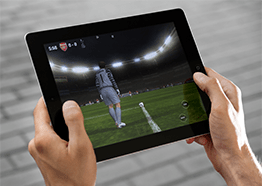 According to Forbes, the sports market in North America alone is expected to reach $71.5 billion by 2018, a significant increase from $67 billion in 2016. To a large degree, this behemoth of an industry relies upon fan loyalty for direct revenue and sponsorship deals. However, with the range of entertainment available today, modern audiences are more likely than ever to shift preferences and stop following a sport if they don’t get the desired experience.

In this competitive environment, sports organizations and teams cannot count purely on athletic excellence to bring in swarms of supporters, or expect to gain steady profits by catering to the most passionate core of their fanbase.

What is the best strategy to maximize ROI, then? A recent survey on fan engagement in sports by Deloitte encourages sports organizations and teams to appeal to a broader demographic of fans while personalizing their experience as much as possible.

Technology presents some of the most effective tools for executing this strategy. Let’s have a closer look at the ways digital innovation is revolutionizing fan engagement.

To be able to successfully connect with your followers, it’s crucial to understand what they want first. It’s no wonder that the application of big data in sports has expanded beyond tracking athletic performance to include tracking the behavior of the fans.

A healthy portion of data points is collected passively, like ticket sales data or TV viewing figures; on the other hand, fans can agree to give up certain info about themselves via branded apps and websites in exchange for perks.

Once captured, the statistics help to determine behavioral patterns of fans in-season and off-season, whilst watching a game with their own eyes or from the comfort of their sofa. Actionable insights available to teams, sponsors and venues improve consumer segmentation, drive personalized offerings, and encourage better business decisions overall.

Besides, swift access to digestible game stats has become a pivotal element in the engagement of so-called “stats buffs” — zealous fans who enjoy nothing more than analyzing statistics. Formula 1, as one of the most technologically advanced sports out there, allows fans to access a dizzying range of metrics through the official app — from sector times to tire strategies to corner speeds for every driver at every moment of the race.

OTT Is Taking Over Audiences

All over the sports broadcasting industry, there are worrying reports on the rapid decline of TV viewership. This month saw the NFL commissioner Roger Goodell admit that the league was suffering a double-digits plunge in TV ratings, and on the other side of the pond the British Premier League is mirroring this tendency with a 19% decline as compared to last season’s figures.

Bad news for TV broadcasters does not necessarily mean bad news for sports, however. The new generation of tech-savvy fans is ready to consume more content, provided that it is delivered to their devices whenever and wherever they choose — and OTT is winning them over with lower prices, flexibility and immediacy of access.

If you can’t beat them, join them. Sports broadcasters are hurrying to launch custom-tailored OTT offerings in addition to their subscription packages, while certain leagues are testing the OTT waters on their own. Case in point — the recent NFL-Twitter deal.

As Dan Kaufman of SportTechie puts it:

“Live sports kept me begrudgingly tethered to cable TV by a loose thread of deteriorating coaxial. So thank you Twitter and thank you NFL. Not only can I begin to break the cable TV bindings, but I can watch comfortably on a phone, a tablet, and a television, wherever I may be.”

The appetite for live content among modern viewers is so great over 50% of them use more than one screen at a time, their attention split between following the event, looking up additional info, in-play betting and sharing opinions online. Broadcasters went from viewing this trend as a sign of boredom to developing a wealth of second screen apps to reach fans across all platforms.

Second screen is looking to become a powerful revenue source, if only the right monetization strategies are employed. Already the information collected through this channel helps advertisers with precise targeting, and broadcasters use the opportunity to give users a taste of premium content to entice them to buy subscription packages.

At the same time, major sports news sources and social media present a mighty opposition to the second screen market, and luring audiences away from them is by no means an easy task. Why download the official app instead of checking the results on Twitter and venting about them on Facebook? The answer should be: exclusive content and rich functionality.

“What remains unchanged is that fans would prefer to hear news or updates from their club first,” states Andy Meikle, CEO and Founder of Sportlobster. “Clubs can address this by working with respected apps, not only creating a warmer place in fans’ hearts, but equally important they can claim a place on their mobiles too.”

Sports teams have always had a knack for utilizing technology to stay ahead of the competition. In the business of fan engagement, the rules are pretty much the same: keeping up with mainstream trends is necessary for survival; experimenting with emerging technologies is the surest way to stay on top of the game.