Oxagile has been at the forefront of the Virtual Reality revolution ever since YouTube added support for VR videos in early 2015. Since then, our R&D team has been closely engaged with 360 VR video capturing, processing, distribution, and playback.

Today, 360 VR streaming is considered a promising addition to traditional event broadcasting. Spectators can now fully immerse themselves into their favorite soccer match and observe it from various perspectives. For example, if a stadium is equipped with 360 streaming cameras at side tribunes, coach zones, field corners, etc., it will allow spectators to switch between playback devices in real-time.

This is one of the ways in which 360 VR could enhance live broadcasting, and we have figured out a way to make it much more feasible and cost-effective.

Nowadays, there is a wide range of 360 VR cameras on the market.

Of course, the end user might go for a plug-and-play broadcasting HQ multi-lens solutions that are capable of stitched HD rectangular panorama live streaming. However, the costs of such setups might easily soar above 10-20k.

Also, when using 10-20k cameras around stadium, one should think of incredible initial expenses, special maintenance costs, and other constraints due to possible acts of vandalism or weather conditions.

On the other hand, cheaper ready-to-go solutions are prerecording only and could never become a core of such an entertainment system.

So, what is the balance we strive for?

Since recently we at Oxagile have been exploring a separated technology branch of capturing 360 VR, fisheye lenses. They could provide an acceptable 360 VR experience with only one lens used (when sky-oriented). We have been using them a lot for prerecorded VR applications. For instance, Entaniya Fisheye 280 mounted on action camera is able to bring nice prerecorded experience, while keeping the price of the capturing pair (lens+cam) extremely low. The cost of maintenance of such popular components is minimal too.

To stream VR video we intended to use a similar setup transformed from fisheye to rectangular perspective for video distribution. 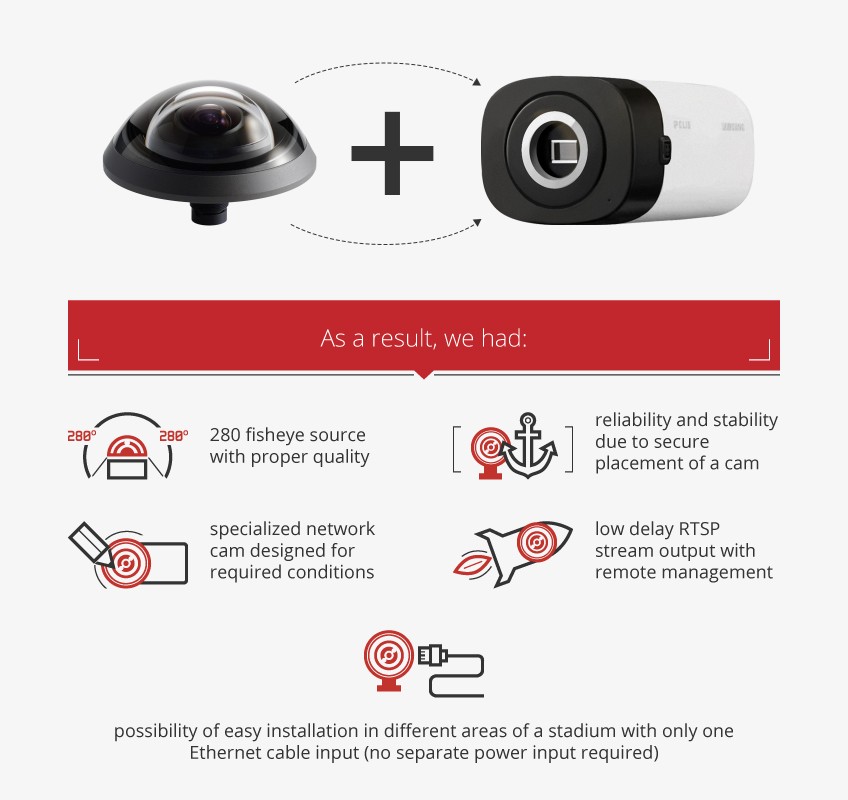 Conventional third party 360 players use rectangular perspective, which is applied to the sphere shape for 360 playback. We decided to modify it and apply real time server side processing of perspective from fisheye to rectangular. It is similar to Polar to Cartesian transformation when we are talking about expected server loading.

Our goal was the customized application, primarily Samsung Gear VR and Google Cardboard, with possibility of flat view, cameras selection by a viewer, and other user-friendly interactive features. The Unity Engine was able to give us the required flexibility for both iOS and Android devices at the same time.

As we used texturing of rectangular perspective to the sphere in other projects within Unity, we created a custom 3D shape for Fisheye 280 Lens. Thus, we managed to avoid Fisheye perspective transformation on the server.

After playing around with 3D Max settings, we successfully created a custom approximation cutoff sphere with proper UV Mapping. When we ported it to Unity Engine, we got what we’d been looking for.

Naturally, this approach still has to be fine-tuned.

As a result, we developed a Google Cardboard and Samsung Gear VR application that allows a consumer to switch between custom-made cams in real time. It uses RTSP in local network and provides a 2K 360 experience.

For the production version, we are preparing a custom low-delay HLS transcoding server with direct link to CDN.

Our next step is to customize the html WebGL player by matching the described shape with a three.js library.

The 360 video and virtual reality creators are challenging the language of storytelling. Solutions like this will help consumers tell highly immersive stories using a 360 VR real time camera for less than $1k. For that price, customers get a reliable, live sports-ready camera that has a low maintenance cost and requires no infrastructure or video post-processing.

Building next-gen content means tackling new engineering problems, and we at Oxagile are excited to make it possible with our online video and live streaming solutions.