Involve Me and I Learn: 3 Areas That Are Serious About VR 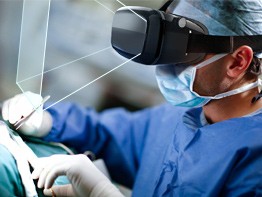 While the first immersive multi-sensory device was patented in 1962, it took mainstream technology decades to catch up with the ambitious idea of immersing humans in realistic virtual environments.

First picked up by the gaming industry, modern VR soon graduated from an entertaining gimmick to the next big thing in a range of occupations.

In this article, let’s bring into the spotlight three industries that are breaking the mold by integrating VR for educational and training purposes.

Engaging Students in the Classroom

Attracting and maintaining students’ attention is a common problem in modern education, and it’s a problem that some VR companies are vouching to solve.

The technology has already manifested its potential to wow students of all ages and keep them engaged far longer than any other medium. What’s more fun – reading about Yosemite Falls in a textbook or joining the President of the United States on a virtual tour of the park’s highest waterfall?

The unique feeling of presence granted by VR can also be responsible for faster learning rates, with the information imprinting on a student’s memory in vivid detail. Many teachers will be relieved to discover that VR headsets don’t let students get distracted by their phones — without putting any restraints on meaningful collaboration within a virtual classroom.

VR is now a mature enough technology to be successfully employed in secondary and higher education. The tech is out there, but educators must grasp its full advantages to justify the hefty cost of high-end VR headsets.

The all-important enlightenment work is shouldered by none other than Google. Since Google Cardboard was introduced in 2014, reportedly 5 million units have been shipped, distributed to schools for free or delivered with an issue of The New York Times.

Using this simple invention, any smartphone owner can get a taste of VR for a modest price — and realize that studying never has to be boring again.

The advent of VR in healthcare was imminent, but went largely unnoticed by the general public. That is, until the Royal London Hospital went live last year with the world’s first virtual surgery that gathered and audience of over 50 thousand people from all around the world.

The event showcased a new trend that’s about to revolutionize medical education as we know it. A rookie surgeon of the not-so-distant future will be able to experience complex operations through the eyes of leading specialists and learn from the best, wherever in the world they might be.

In fact, virtual reality is penetrating all branches of healthcare, helping physicians to understand their elderly patients better, paramedics to hone life-saving procedures, and patients themselves to restore mobility after a stroke or spinal cord injury.

In a profession that doesn’t allow for blunders, VR’s ability to provide realistic and risk-free training sessions makes the technology invaluable.

Getting Ready for the Pressure in Hazardous Jobs

We have seen how VR training lets medical students go through complex procedures with no risk to the patient. In many occupations, however, the trainees themselves are running high risks of injury or death.

As early as 1999, Australia’s University of New South Wales deployed a flat-screen proof-of-concept of a virtual reality simulator that is now an important part of the Mining Engineering curriculum. Within the simulation room, students can assess the feasibility of mining projects, select mining methods, test evacuation procedures in worst-case scenarios, and more.

Similarly, VR training brings down training costs for future pilots who can try out their skills in easily customizable situations, from standard takeoffs to emergency landings. The sim can even help gather feedback from pilots in the process of designing an aircraft.

Firefighter training in many countries involves detailed and repeatable VR sessions in which trainees enter burning buildings to try and rescue every person trapped inside before getting away safely.

In fact, in a testament to the realism of modern VR, the Dutch Safety Institute formally allowed to carry out the Dutch firefighting exam completely in virtual reality.

Simulations keep the pressure while removing fear, allowing trainees to fail and try again until the task is completed and the lesson is learned. No video or role-play could match this kind of impact.

What’s Next for the Brave New (Virtual) World

With the fast-paced development that VR is enjoying, we can soon expect all technical limitations to widespread adoption to go away. Moreover, the competitive market is driving down the costs of hardware, trying to propel the technology into the mainstream.

On the software side, VR-related job postings are skyrocketing, with Computer Vision Manager named “the hottest job in VR space”. Given the right content, the technology is poised to disrupt the e-Learning market as well.

The demand for such content in the form of custom and off-the-shelf virtual learning solutions is on the rise in every business that is looking to break the status quo. And why wait, if virtual worlds can finally help us solve real-life problems?